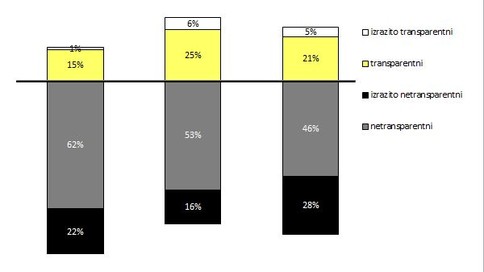 Although the inhabitants of Rijeka can boast living in the most transparent city in Croatia, with the Varaždin county in the lead among the twenty counties and Belica taking the first place among municipalities, on the whole, every third citizen of Croatia lives “in the dark” – show the results of the LOTUS openness and accountability research. The research was carried out for the third time by  GONG and the Association of Cities in Croatia, lasting from late June to early October 2014 and encompassing all 576 local and regional self-government units in Croatia.

The processes of democratization and EU integration have not led to the principles of accountability and transparency being implemented in practice – as much as 74 per cent of local self-government units in Croatia are still non-transparent. Although slight improvements were made between 2009 and 2012, the 2012-2014 period is marked by stagnation, even a slight backslide in the results. Even though municipalities are the main “culprits” for this finding (with two thirds of municipalities falling under the two non-transparent categories), a substantial portion of cities has also contributed to the overall unsatisfactory result.

As many as 1.473.218 Croatian citizens – every third person in Croatia – through sheer chance, live in environments that do not enable them to be active and responsible citizens, as opposed to passive minions. It is precisely this fact that worries the most when considering the results of this round of research, whose goal was to determine the current transparency level in comparison to the two previous rounds of research, as well as to encourage higher levels of transparency among local and regional self-government units.

The results are based on data gathered through examination of the local and regional units’ official web pages, their Statutes and the Standing Orders of their representative bodies, a survey, an official written request for information and a telephone call. The research has, as in the previous rounds, included dimensions encompassing the publicness of the representative and executive branches of government, enabling the right to access to information, cooperation with the community and communal self-government. Some indicators in this round have been modified due to changes in the legal framework that took place since the last round, while some have been made more strict due to an expected internalization of transparency principles, an expectation that has ultimately been failed.

The units in the research could attain a maximum of 10 points, with actually realized points ranging from 0,44 to 9,61, with an overall average of 4,45 points. Municipalities have, on average, realized only 3,64 points and are on the whole in the “non-transparent” category. With average results of 5,91 and 6,11 respectively, cities and counties are fall under the “transparent” category overall, but there is an obvious and substantial scope for the improvement of their practices.
According to summary results, local and regional self-government includes:

Whom or what do local self-government units serve?

This research has demonstrated that the key problem in Croatia is not an inadequate legal framework, but a lack of its systematic implementation in practice, compounded by low levels of capacities and lacking resources – human, material, technical and financial – to perform all legally prescribed functions of local and regional authorities.

Especially disheartening is the fact that, ten years after the Act on the Right of Access to Information was passed, a third of the units failed to reply to the official request for information. Furthermore, despite an increase in the availability of official web sites, from 75 percent in 2009 to 98 percent in 2014, this had little positive impact on the transparency of the units. Self-government units are either incapable or unwilling to communicate on politically important issues, as well as issues impacting citizens’ everyday lives. Instead of serving the purpose of informing citizens and including them in day-to-day political and social life, official web sites are still, for the most part, used to disseminate service information and to advertise historic, cultural, religious and tourist contents.

Considering this lack of systematicity in publishing relevant information, it is hardly possible to expect the inclusion and meaningful involvement of citizens and interested publics in local decision-making processes. Lacking an awareness of the need of continuing improvements to attained levels of transparency and public accountability, there is no such thing as reflection on the vision of a modern democratic political community.

Taking into account the results of this research, as well as several others, it is high time that the national level of government, both the current government and the opposition, takes responsibility for territorial reform and, at least, a functional merging of some local and regional self-government units. It is not only about possible savings, or increased efficiency and effectiveness of governance, not even about EU funds. It is about the constitutional right of citizens to procedural equality, in line with the democratic principles of transparency and accountability, and the right to good governance in all parts of Croatia.

Who won the LOTUS 2014 award for transparency?

Where did the European values disappear?

Take control over your information flow! We recommend that you use GONG RSS feed.
ABOUT GONG
ELECTORAL SYSTEM
GOOD GOVERNANCE
ACTIVE CITIZENS